AT - Autograph of a fragment 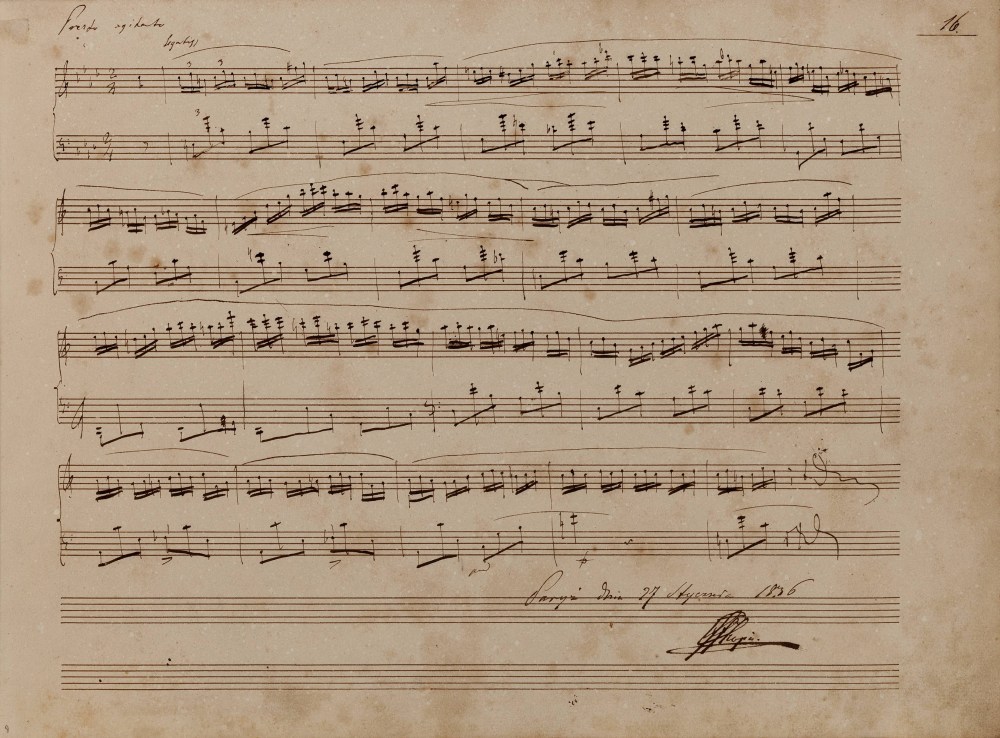 Autograph of the opening fragment of the Etude, written into an album of Antoni Teichmann. 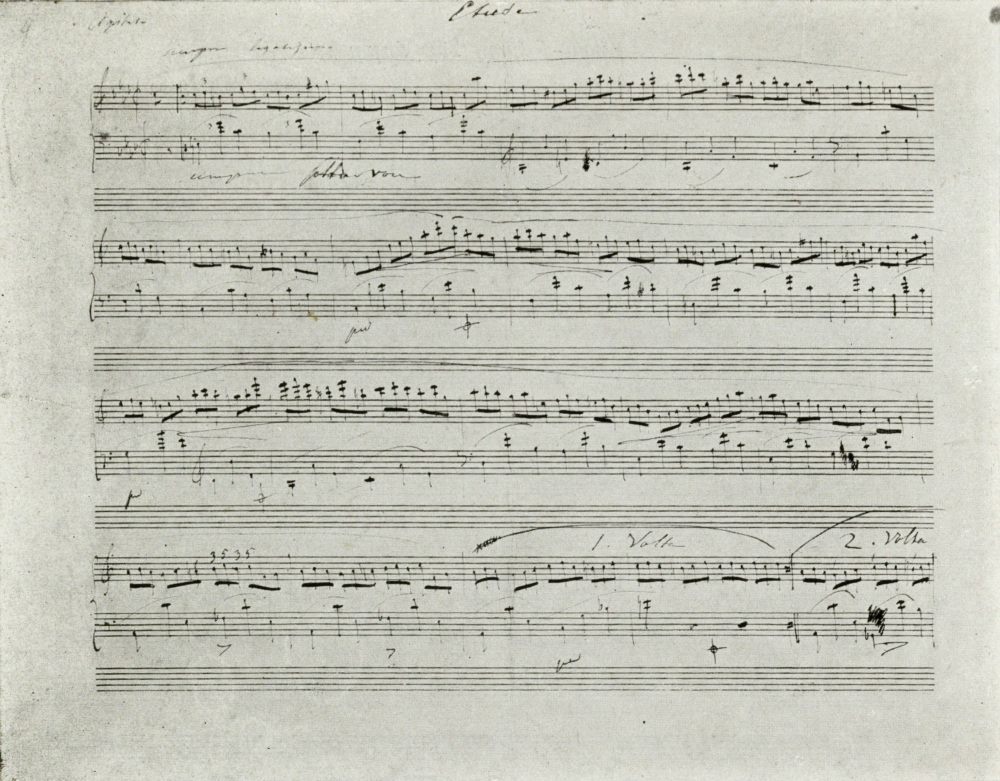 Copy from an album belonging to Delfina Potocka 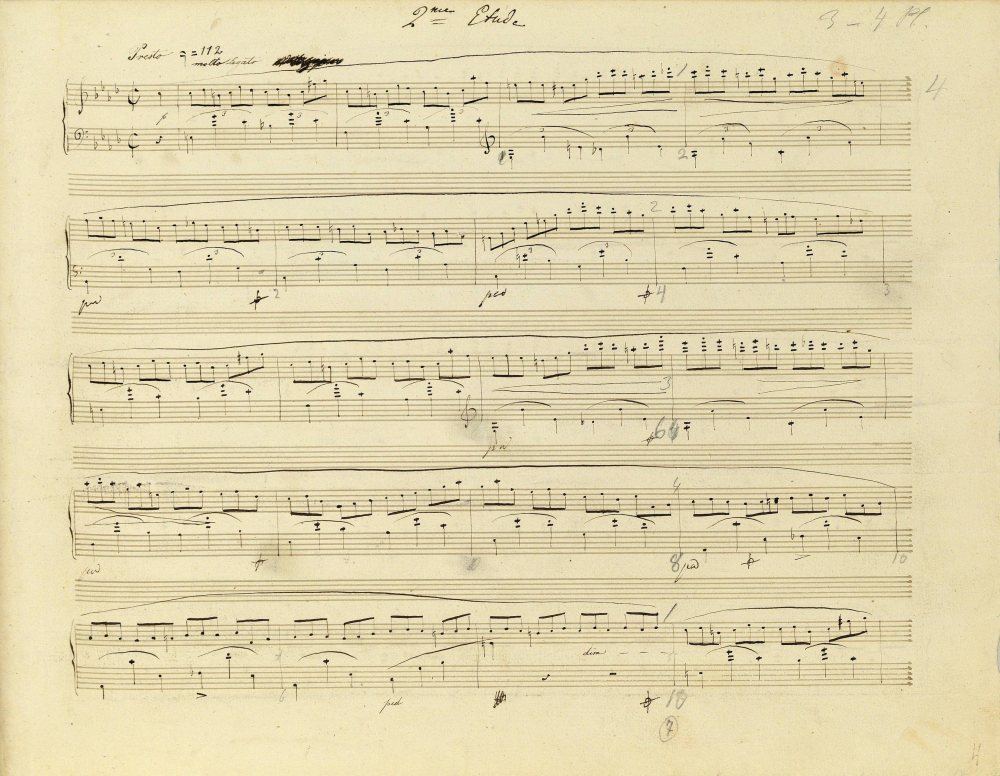 Gutmann's copy intended as a basis for the first German edition. 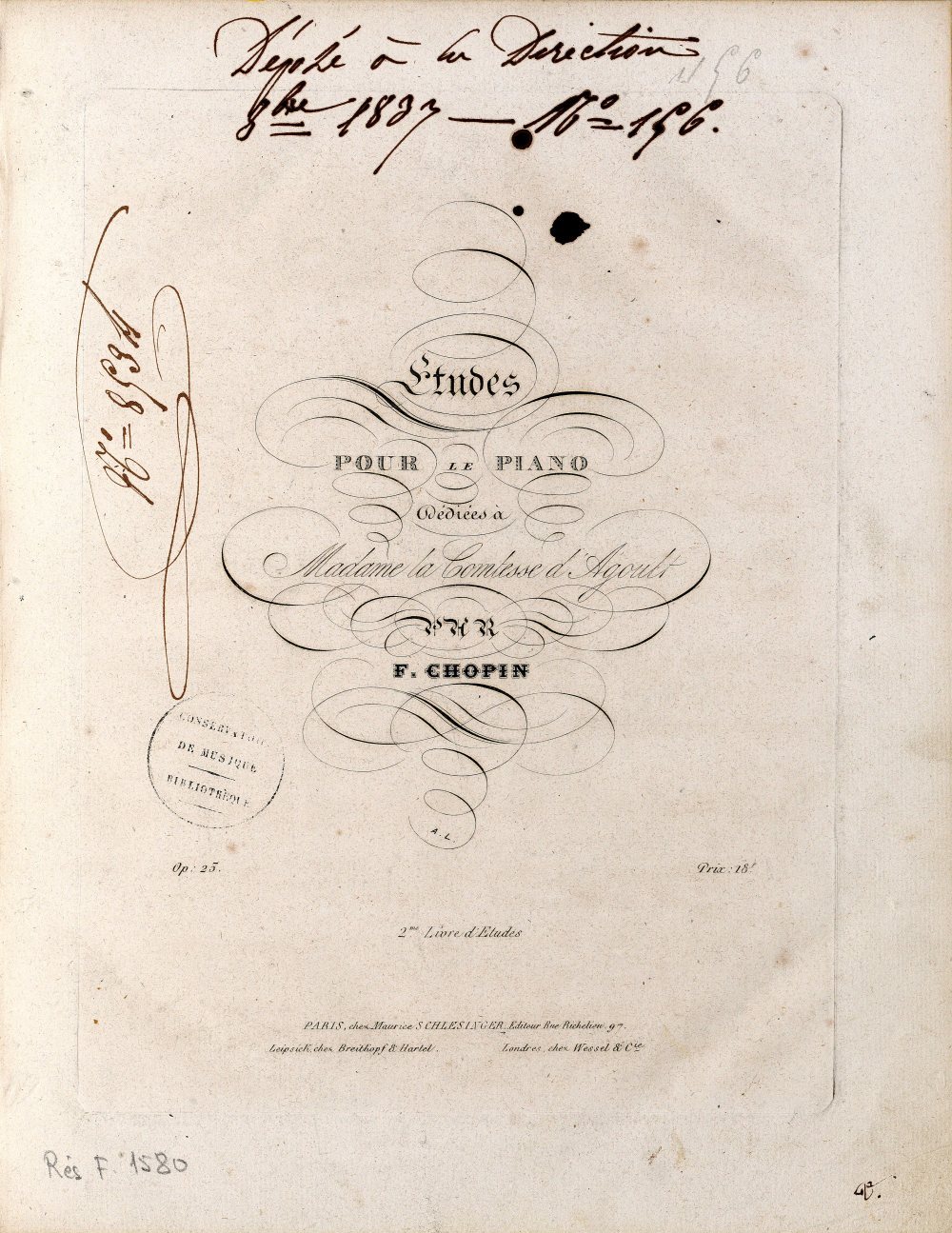 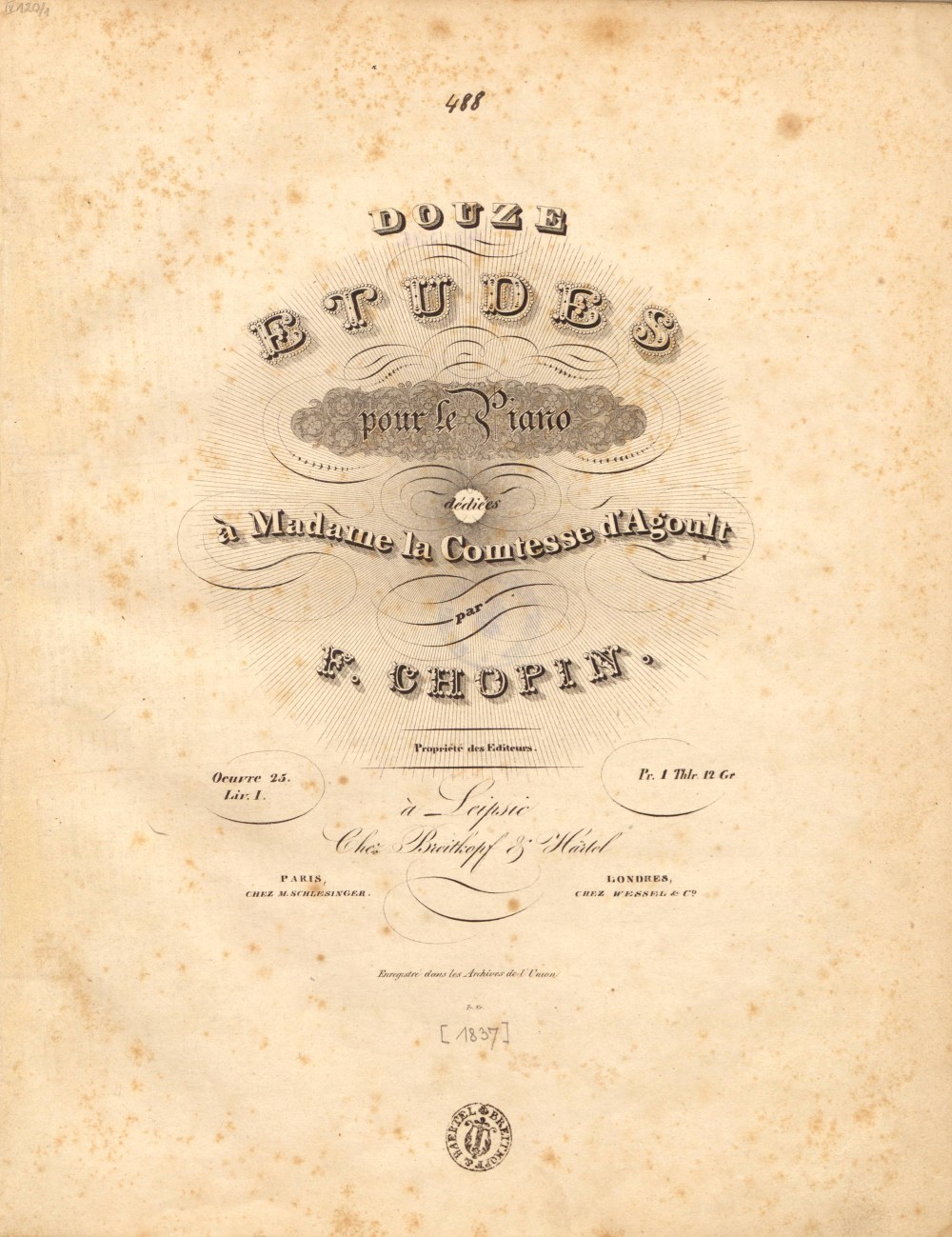 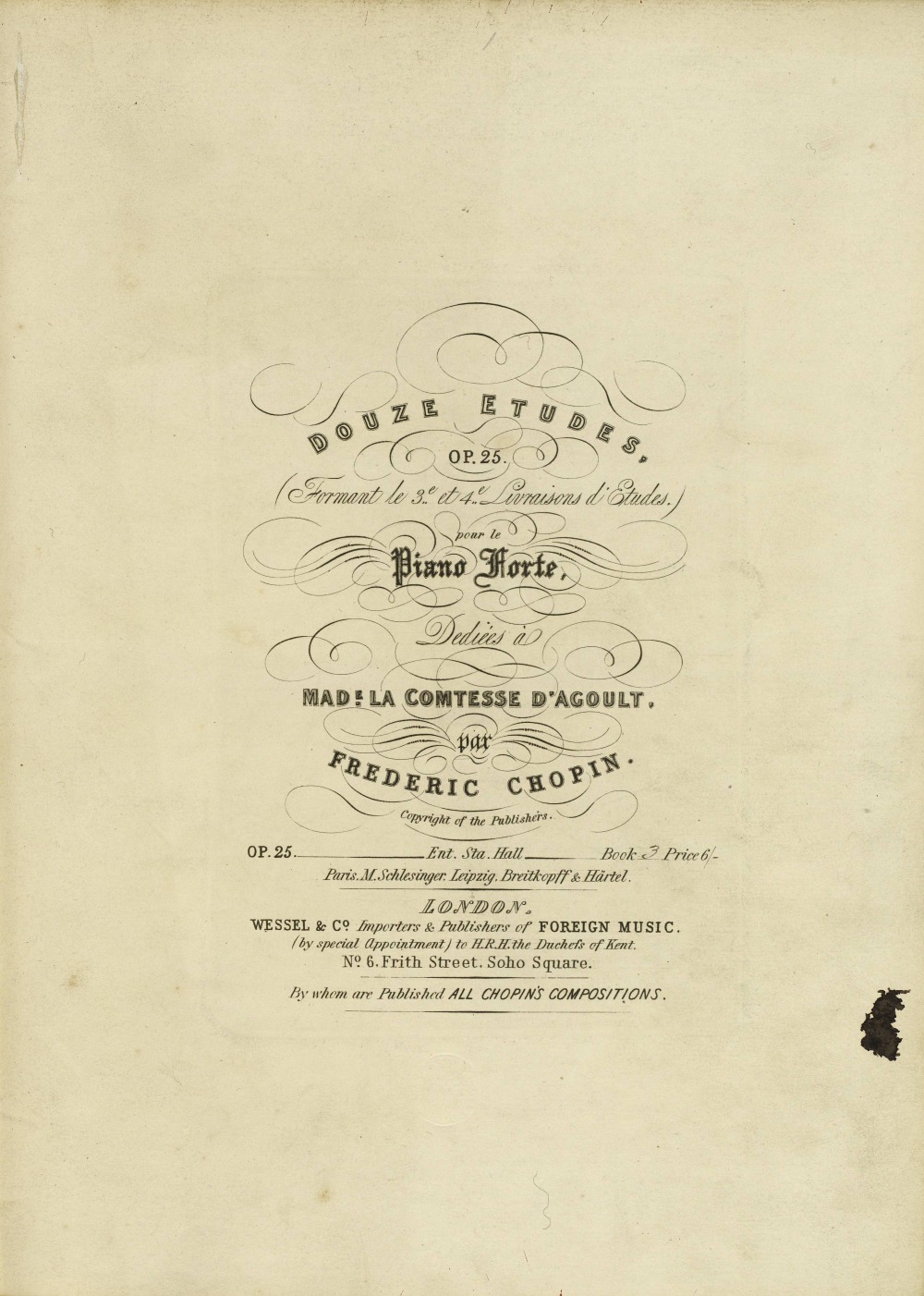 Filiation of the sources

The basis for the three first editions (FE, GE and EE) prepared by Chopin consisted most probably of a collection of 36 manuscripts (three sets with twelve manuscripts each), encompassing the autograph (A) and presumably two copies of each of the twelve etudes. The copyists were Julian Fontana and Adolphe Gutmann. Extant manuscripts of this collection include three autographs (Etudes no. 1, 4 and 8), six copies by Gutmann (Etudes no. 2, 3, 7, 9, 10 and 11) and four copies by Fontana (Etudes no. 4, 5, 6 and 12). For each Etude the autograph Stichvorlage was used as a model for one copy; the other one could be based on A as well, or on the already prepared copy, possibly checked and amended by Chopin. A comparison of the sources shows that in completed manuscripts (both autographs and copies) Chopin made improvements and supplements prior to their presentation to the publishers. The majority of the changes coincide or supplement each other; the differences can be explained by their sometimes hurried introduction in different periods. The extant complete set intended for GE includes two autographs and ten copies, while only an autograph of a single Etude is extant from the set intended for FE. Not a single manuscript survived from the set intended for EE. In this situation it is possible to determine the chronology of the changes only in a few cases. We accept as the basis of every Etude an authentic source (manuscript or first edition corrected by Chopin) prepared by the composer with greatest care, and compared with the others, with particular attention paid to the corrections of FE made by Chopin.

Principles behind the main text of
the Etude in F minor Op. 25 No. 2

We accept as our basis GC compared with FE, EE, AW and CDP, and take into consideration the annotations made by Chopin in FED and FES.